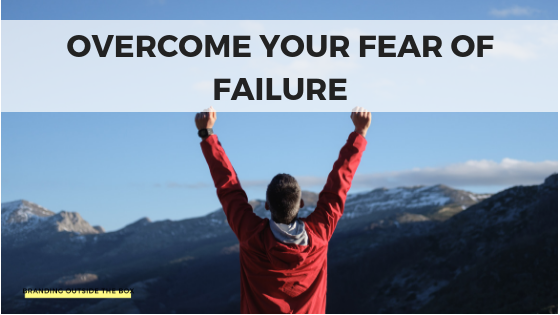 Entrepreneurs have a high risk tolerance, but even the most successful entrepreneurs I know still struggle with a fear of failure. In this post, I’m sharing some techniques that have helped me move past this and take action.

If you follow me on social, you have probably seen that I identify as a triathlete. I swim, I bike, I run, and I like to do all three in the same day. I’ve competed in dozens of races, including an Ironman. I love the sport.

And yet, I haven’t raced in three years.

A couple years ago, I finally got back into training after becoming a parent and I felt like I was crushing it. My times were dropping, I was able to manage work, family, and training, and I felt good about my overall health. I even thought I had a chance of qualifying for the nationals.

It was the last big brick workout (long bike ride, followed by a run) before my focus race and I was feeling great. I was on my bike, about a mile from my house, already envisioning a speedy transition into my running shoes…

And then a car door opened.

I flew off my bike and hit the pavement. My helmet cracked in half (PSA for those of you who don’t wear helmets, you really should!) and I had major contusions along the right side of my body. It could have been way worse, but my season ended right there in that ambulance.

About a month later, when I finally had the go-ahead to start running again, my speeds plummeted. 9min miles were now 11-min miles and I still felt shaky going full speed on my bike. I knew that it would take a long time to get back to where I was before the accident, and I wasn’t sure if I even wanted it. I was disheartened and frustrated.

So I took up boxing.

I was always curious about boxing, but never made the leap to try it because I was always training. But now, I had nothing else to do, and there’s no stress reliever like hitting the heavy bag.

I also returned to yoga, boot camp, and other classes I had stopped attending during triathlon season. I let fitness become enjoyable again. And soon, I felt the desire to run, swim and bike. And after having fun running and swimming and biking for the past couple years, I finally feel ready to race again.

What does this has to do with fear of failure and entrepreneurship? A few things.

Measure yourself by where you are now.

We all go through different seasons of life. We have the season of day job + side hustle. The season of getting married, of becoming parents, and so on. We can’t measure ourselves by where we were at a different season than we are currently in. I didn’t want to race because I knew I wouldn’t be as fast as I was before the accident and I would feel like a failure if I got a bad time. We think we’re failing when we can only work four hours a day because we have a baby that will only let us work if he’s sleeping. We feel like failures because our side hustle isn’t yet replacing our day-job revenue, or that we can’t grow our businesses as fast as we think we should because we can only work on it nights and weekends.

But instead of assessing our success by what we used to do or comparing ourselves to others in our field who are at different stages of life, we need to measure ourselves by where we are now. So you didn’t grow your client base at the same pace as you did before you became a parent. Were you able to experience some slow growth while working half the time? You haven’t replaced your 9-5 paycheck, but did your side-hustle earn more than it did last quarter? You’re not as fast as you used to be when you were in your 20s and only cared about training. But are you faster than you were last week?

By gauging success based on your previous self, you’re setting yourself up for failure. Re-calibrate your ruler and measure yourself by your current season of life.

Care less about what other people think.

And this includes yourself! One of the big reasons I didn’t want to race was because I feared seeing my triathlon friends out on the course and them thinking, “Man, she’s really getting slow!” Or that they’d see my Ironman tattoo on my calf and think, “Whoa, she can do an Ironman but she can’t do a 5K without walking?”

Would any of them actually think that? Of course not. But you know who was really thinking that? Me.

Every time I worked out, I’d look at my pace and think, “Jeez, you’ve really gotten slow.” And through all that negative talk, I convinced myself that everyone around me was thinking the same thing I was.

We care too much about what other people think, when in reality, people are too focused on their own stuff to pay attention to yours. And if there are a handful of people who do judge your struggle, well, then that’s their problem, not yours.

You learn more from failure than you do from success.

When you have a really successful launch, or sign a big client, or make a great sale, that the tendency is to follow the old adage to “don’t fix it if it ain’t broke,” so there’s no incentive to explore alternative strategies—even if it could ultimately be more beneficial to do so.  But what about your failures? Do you analyze and break down processes, trying to figure out where you went wrong?

If I had completed my race as planned, I probably would have gotten a decent time and decided that what I was already doing in my narrow training lane was working. But through this setback, I was able to expand my focus, really see areas for improvement, and make the necessary changes to see exponential growth.

If you never fail, you never improve. Take each of your failures or setbacks as an opportunity to learn, grow, and get even better.

This year, I have signed up for my first race. I am in a new age group, with a different training plan, and I’m using this year as my baseline measurement, no looking back. And if there are setbacks, I will do my best to use the insights I gain as a learning opportunity and chance for exponential growth in the future. I’m moving past my fear of failure.

And I hope to bring the same spirit to my business.

How have you overcome your fear of failure as an entrepreneur? Share your story in the comments!